This 19th century building provides cover for a permanent sawpit and is typical of many such buildings in villages and on estates. Inside can be seen a range of tools used in the handling and conversion of timber.

The sawpit shed from Sheffield Park was probably built at about the same time as the complex of farm buildings on the same site — a model farmstead of the early 19th century.

In his 1813 report on the agriculture of Sussex, the Reverend Arthur Young included an illustration of the main farm buildings at Sheffield Park and commented that Lord Sheffield has paid particular attention to the growth of timber, and there is no estate in the county on which there is so great a stock of fine young oak.

About 1920 the sawpit was filled in, having been used latterly for halving logs too large for the new steam-driven saw bench.

Sawpits were often roughly constructed for short-term work in the woods, but many permanent pits, like the one from Sheffield Park, were also built, usually sited near workshops in villages.

There was, for example, a substantial brick-lined sawpit close to the highway opposite the smithy and wheelwright’s shop at Southwater. Logs could be directly unloaded from the tug (timber wagon) and rolled on top of the pit.

These permanent sawpits were usually covered by a shed with one open side to allow timbers to be rolled down, and the Sheffield Park sawpit shed is a good example of this.

Pit sawing in the 20th century.

In the Middle Ages sawing was done on trestles rather than over a pit. Medieval drawings usually show logs slung up on trestles with the top sawyer (who guided the saw) standing on the log and the bottom sawyer (who pulled the saw) underneath.

Sometimes logs were sawn propped up on a single trestle, a method which produced characteristic oblique saw marks on the timber; these can be seen at the Museum in the hall from Boarhunt.

Sawpits were certainly in use by the early 16th century and where the ground was suitably drained they eventually took the place of trestles. When the oak of the Weald provided the essential structural materials for ships, mills, barns, houses, and cathedral and church roofs, as well as being used for fuel, hundreds of sawyers must have been employed within the Wealden area.

By the 16th century, sawmills powered by wind or water were already producing timber, and by the 18th century mills of this type were to be found in the Weald. There was rapid expansion in the use of machine cut weatherboard, particularly in the eastern parts of the Weald, although a great deal of timber was still pit-sawn. 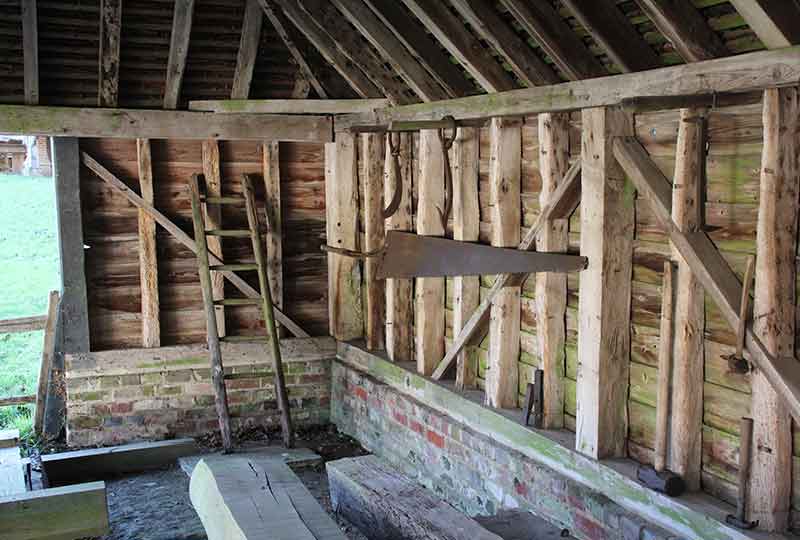 According to a report of 1813 on agriculture in Hampshire, the following payments were standard in this area:

Twelve square feet per hour is an average rate of production for pit-sawn boards.

This covered estate sawpit dates from the early 19th century, and was typical of many in villages or on estates. 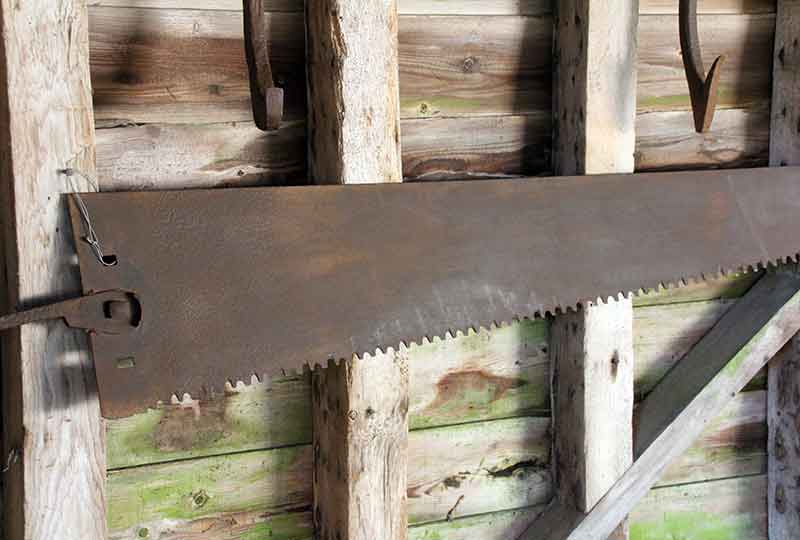 The building structure reflects its purpose, that is to cut timber along its length for use around the estate.

An 1813 agricultural report in Hampshire suggests 12ft² per hour was an average rate of production for pit-sawn boards.